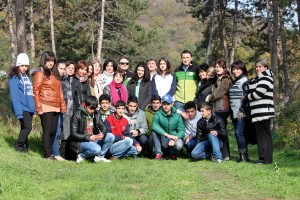 From October 30 to November 02, 2014 a Regional Eco-Camp was held for pupils and teachers from Armenia and Georgia in Zikatar Environmental Center, Tavush province. The aim of the event was to conduct environmental seminars and organize environmental tours to raise the awareness of pupils and teachers on nature conservation including forests, the vital role of nature for people, etc.The environmental event was organized by Mkhitar Sebastatsi Educational Complex of Yerevan with the support of WWF-Armenia. There were more than 40 participants from Mkhitar Sebastatsi Educational Complex (including secondary and high schools), 2 schools from Aragatsotn and Gegharkunik provinces and 4 schools of Tbilisi, Georgia.On the second day of the camp an event “One Day with WWF” was organized. The day was started by visiting the EU funded Forest Transformation Project’s pilot site in Noyemberyan Forest Enterprise of “Hayantar” SNCO located nearby. Afterwards, the event was continued in Zikatar Environmental Center where Gera Voskanyan, Partnership and Communications Manager of WWF-Armenia, presented WWF’s role in the Caucasus Ecoregion and particularly in Armenia and later Vasil Ananyan, Project Coordinator of WWF-Armenia, presented the endangered species of Armenia and WWF-Armenia’s approach towards their conservation. Summing up the day the bear film was presented and later all participants received different communications materials. 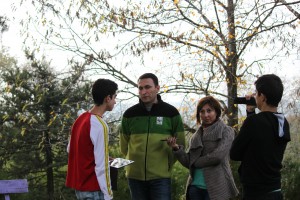 During the Eco-Camp the participants from Armenia and Georgia also discussed the planning of an Eco-Tour 2015 Regional Environmental Event to have a larger scale event than the one held in July 2014. It was planned to involve more schools and eco-clubs as well as to raise additional funds in both countries